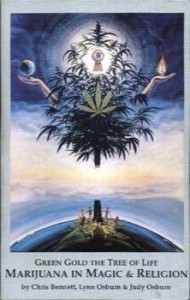 In Chris Bennett’s book Green Gold:  Marijuana in Magic and Religion he says, “there is some very good physical evidence that indicates cannabis played a part in some of the native cultures prior to the arrival of Columbus.”  In 1985, Bill Fitzgerald discovered resin scrapings of 500-year-old pipes in Morriston, Ontario containing “traces of hemp and tobacco that is five times stronger than the cigarettes smoked today.” Other archaeological evidence includes stone and wooden pipes and hemp fiber pouches that were found in the Ohio Valley from about 800 A.D.

Indians in the Mexican states of Veracruz, Hidalgo, and Puebla practice a communal curing ceremony with a plant called Santa Rosa, identified as cannabis sativa, which is considered both a plant and a sacred intercessor with the Virgin.  Although the ceremony is based mainly on Christian elements, the plant is worshipped as an earth deity and is thought to be alive and to represent a part of the heart of God. [2]

The British navy used hemp extensively for the manufacture of ropes and rigging in the seventeenth century, but UK farmers were unwilling to grow the plant because it was believed to deprive the soil of nutrient. In addition, hemp demanded time- consuming preparation, which was also unpleasant due to the smell produced by the retting process. Consequently, the British Government tried to persuade settlers in Virginia and Maryland to grow cannabis to meet the navy’s demand, but this measure met with only limited success because tobacco was a much more profitable crop. The hemp industry became more important during the American Revolution, when fiber was difficult to obtain from Europe, but production declined rapidly after the Civil War due to labour costs and the preferential use of alternative types of fiber such as cotton. In the Midwest hemp was still grown for a while as a source of birdseed. Throughout this period of cannabis farming, the plant gradually escaped the confines of farmland and began to grow in the wild. In Nebraska it was estimated in 1969 that there was approximately 150,000 acres of wild hemp growing.

In 1860, a committee of the Ohio State Medical Society published a report on the medical uses of cannabis. Information was provided on its use to treat puerperal psychosis, various pains (inflammatory, neuralgic, abdominal), gonorrhoea, cough and so forth.

The word ‘marihuana’ is the term predominantly used in the US today to describe cannabis. It is derived from the Mexican-Spanish marijuana, the original meaning of which is now obscure. Initially, it may have been used to describe rough grade tobacco. [1]

2. History of Cannabis in North America