Thin Layer Chromatography or TLC is a popular method to determine how many components we have in our mixture. It is also used to identify a specific compound in the mixture. The components are separated based on their chemical structure, molecular weights and polarity. In order to do so it is recommended to run the unknown compound and the known one on the same plate so that they can be compared. Another important constant when identifying compounds is their retardation factor (Rf), which is the ration of the distance travelled by the centre of a spot to the distance travelled by the solvent front. [1]

How does it work?

A TLC plate is a sheet of glass, metal, or plastic which is coated with a thin layer of a solid adsorbent (usually silica or alumina). A small amount of the mixture to be analyzed is spotted near the bottom of this plate. The TLC plate is then placed in a shallow pool of a solvent in a developing chamber so that only the very bottom of the plate is in the liquid. This liquid, or the eluent, is the mobile phase, and it slowly rises up the TLC plate by capillary action. [1]

Can TLC be used in cannabinoids analysis? 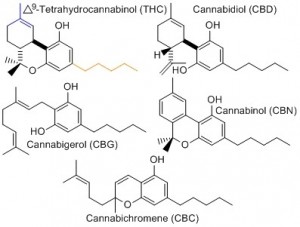 In a research paper from 2004 N. Galand and his team have studied different liquids (or eluents) to determine which one provides the best separation between the cannabinoids from Indian hemp sample. They have observed that the best eluent is hexane-diethyl ether, which allows separation between carboxylated and decarboxylated THC, CBN and CBD. The authors discuss that such separation is not possible with classical TLC (with 1 eluent) because the cannabinoids have very similar chemical structure. For example, THC and CBD have the same molecular weights and CBN is very close. The authors have used Automated Multiple development thin layer chromatography (AMD TLC), which used 2 or more eluents for better separation of the components. [2]

Another research team has used two-dimensional descending TLC (with 2 eluents) and was able to identify 13 cannabinoids. [3]

What are the main challenges in detecting cannabinoids with TLC?

As we discussed at the beginning TLC uses compounds’ structure, molecular weights and polarity to separate them.

Cannabinoids have similar chemical structure as you can easily see from the figure below.

Also they have similar molecular weights. [5]

What are the disadvantages of classic TLC (with 1 eluent)?

The detection limit is high, which means that it is difficult to separate compounds with similar structure. It is an open system so results could be affected by factors like temperature and humidity. [4]

What kind of information I can obtain from a classic TLC (with 1 eluent)?