One of the most common myths about cannabis is that it is not studied because it is illegal. Well, this is not entirely correct. Although cannabis species that produce high amount of THC are indeed illegal in lots of countries and probably not studied as much, there is a substantial amount of research about their close relative – Cannabis Sativa L (or also known as hemp). 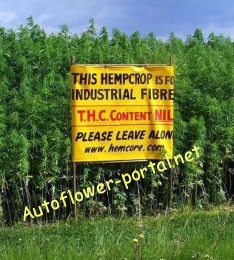 Looking into hemp scientific research could help to understand more about cannabis plant genetics and give an idea about autoflowering cannabis origin.

But let’s start from the beginning:

Why can we use hemp research to learn more about autoflowering cannabis?

Cannabis Sativa L or a.k.a hemp is non-psychoactive cannabis used for fibre, seeds and wood. [2] It produces low amount of THC. Level of THC is one of the main criteria to distinguish hemp from recreational and medical cannabis.

Where does autoflowering cannabis come from?

There are 2 main hemp varieties, which were described in the literature. Early European varieties of hemp were selections from indigenous populations and generally were grouped into northern and southern types (Hoffmann, 1961). Northern hemp is characterized by rapid early growth, early flowering, strong branching, and high seed yield. Southern types tend to be slow-growing, tall, late flowering, and have high yield and fiber quality and poor seed yield (Van der Werf, 1991). [1,2]

For example, one of the Northern type hemp is Archangelsk, which is considerably short (35-50 cm) and mature within 80 days.

Another famous hemp variety “Finola” is bred in Finland from Russian stock that matures early and gives high seeds yields with short-term straw. Essential oils are extracted from the flowering tops of low THC hemp varieties, using steam distillation, in specialist production units normally designed for processing herb crops. Because of the necessity to harvest the tops of the plants, there is a clear disadvantage in having very tall fibre-type varieties. Therefore the development of hemp essential oil has, to date, been primarily through production of the short-stature Finola variety, which is the only such variety available in the UK [5]

What about Cannabis ruderalis?

Recognition of C. ruderalis is not supported by the chemotaxonomic evidence because no significant differences were found between ruderal accessions from central Asia and Eastern Europe. These results are consistent with Vavilov’s two-species concept and his interpretation that C. ruderalis is synonymous with C. sativa var. spontanea Vav. (Vavilov, 1926; Vavilov and Bukinich, 1929). [6]

What is Cannabis Indica?

Where do these varieties come from?

According to the sources hemp originates from Central Asia and was found in different regions – from Iran to southern Siberia. This is also consistent with distribution of high THC cannabis strains which were used for centuries in Indian and Chinese traditional medicine.[4]

Is there specific “autoflowering gene”?

According to the research on hemp the length of the vegetative period in relation to branching increases towards the south. For example, while some northern type hemp needs only 80 days to mature, some central Russian hemp (from Orlov or Kursk) occupies an intermediate position with respect to their characteristics and differs from the northern ones by taller growth, more branches and medium-long vegetative period and medium-sized seeds. Some hemp varieties, which produce seeds require 5-6 months to produce mature seeds, while fibre hemp needs 4-5 months for proper fibre production. [2]

If the autoflowering characteristics could be contributed to only 1 gene, then there will be no varieties but only 2 types: photoperiod and autoflowering plants. However, the research shows that there are different cannabis plants that mature from 80 days up to 6 months with different variations in between. The existence of cannabis varieties, which requires different times to mature, suggests that autoflowering cannabis characteristics are very complex and cannot be associated with single specific gene.

This is why using Mendel genetics of single trait inheritance will not be accurate to describe autoflowering traits. Although Mendel is the father of modern genetics and his research is invaluable contribution to scientific progress we should not forget that his research was done in 1865 in a monastery and describe basic principles of phenotype inheritance. Modern genetics has discovered that gene interactions are complex and the cases of single gene responsible for a complex of traits are extremely rare.