“Inbreeding depression” is a hypothesis for some issues, which occur during inbreeding. According to this hypothesis when the hybrids are selected for their recessive traits and inbred, they are likely to lose their vigour, develop defective flowers or seeds, lack chlorophyll, etc. Such plants normally do not survive, however there are other abnormalities, which may not lead to immediate extinction (for example, dwarfness and partial chlorophyll defectiveness).

Dominance hypothesis (True-breeding) – according to this hypothesis it should be possible to obtain inbred lines, which preserve all desired dominance traits. However, experiments with high-yielding inbred lines show that this is not the case. In extensive experiment Jones (1917) proves that any single chromosome would carry some favorable dominant and some unfavorable recessive alleles. In order only dominant traits to be preserved, it will require very precise crossovers and fortunate chromosomal segregation, which could be achieved in very large number of sexual cycles. This led to Dominance of linked genes hypothesis. [1]

While the component 1,2 and 3 depend on environmental factors like photoperiod regime, light spectrum, light intensity, nutrients levels and cultivation system (seedlings or cuttings), component 4 is determined genetically.

The method used to create uniform lines that produce predominantly only 1 cannabinoid is repeated, selective self-fertilization. Self-fertilization could be achieved with artificially induced sex reversion. The benefit of using female plants is that component 2 and 3 are fully expressed in female plants.

Then it was developed another method, which follows 4 steps:

Step 1: Often for cannabinoid production (other than THC) is selected non-drug cannabis type with low values of component 2 and 3. This plant is then crossed with high yielding THC plant.

Step 2: The hybrids can be backcrossed to improve some traits such as fertility, ability to artificially revert sex or morphological marker gene. The plants are stabilized for up to 5 cycles.

Step 3: Inbred parental lines are mutually crossed and hybrids are evaluated for their qualities.

Step 4: The selected hybrids are then made tetraploid clonal versions, which are used to create the most profitable crosses. It is known that creating polyploid plants through breeding could benefit them – they have better developed roots, fast metabolism, better metabolite production (in this case cannabinoids) and increased stress resistance. [3]

Drop in fertility rates during selection process is a common issue. Reduced fertility is usually associated with low seeds production, low pollen production or reduced amount of female flowers. Cannabis strains that produce high CBD have shown tendency for drop in fertility rates. This could be avoided by crossing with highly fertile and vigorous THC plant.

Common mutations, which occur during the breeding process are duckfoot leaves, mild form of chlorophyll deficiency in stems and leaves, triple instead of pairwise leaf arrangement and dwarfism. These mutations appear to be recessive traits.

Non-drug cannabis types are also able to produce cannabinoids and the only difference from drug type plants is the THC. It is interesting that some hemp landraces from Far East produce significant amount of THC. 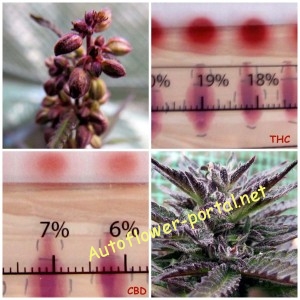 Some of the pure sources of CBC are Afgani hashish landrace, Korean fiber landrace and Chinese seed landrace with highest value of CBC – 57%.

CBG is common precursor for THC, CBD and CBC. An Italian fiber hemp mutant is identified as CBG producer. [2]