This research is dedicated to cannabinoids, terpenes and fatty acids production.

What causes the “cannabis smell”?

Cannabis plant has a specific smell and it is not results of the cannabinoids but monoterpenes and sesquiterpenes. For example, police dogs cannot smell THC but they can smell the sesquiterpene caryophyllene oxide.
A smell comparison between 19 strains of fiber hemp and “drug type” cannabis confirmed that desirable smell was result of monoterpenes and sesquiterpenes production. The authors managed to identify 16 terpenoid compounds and they discovered the most produced terpenes were myrcene, trans-caryophllene, alpha-pinene, trans-ocimene and alpha-terpinolene. 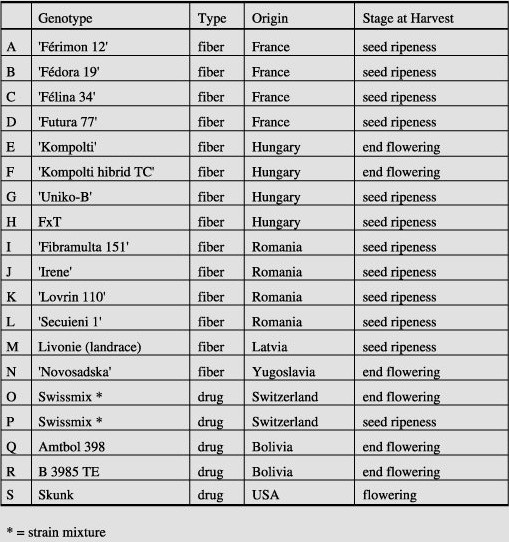 Although smell is very subjective phenomenon, the authors discovered that plants that produce high quantity of sesquiterpenes have low rating, meaning they smell badly. Cannabis plants that produce high quantity of monoterpenes (but low alpha-humulene or caryophllene oxide) have high rating, meaning they smell good. Surprisingly, a mix of oil from different strains received the best rating. The authors suggested that harvest stage and weather before harvest could influence the quality of terpenes production.[1]

When do you have high yield and quality of terpenes?

The authors conducted greenhouse experiment with 6 strains, smell test and chemical analysis of distilled oils. They observed that pollination significantly reduced the amount of terpenes (more than twice) and that there was no correlation between harvest dates and smell test. The best scent quality was observed 1-3 weeks before seed maturity (75% of seeds matured), however the highest yield of terpenes production was observed at 50% seeds maturity. 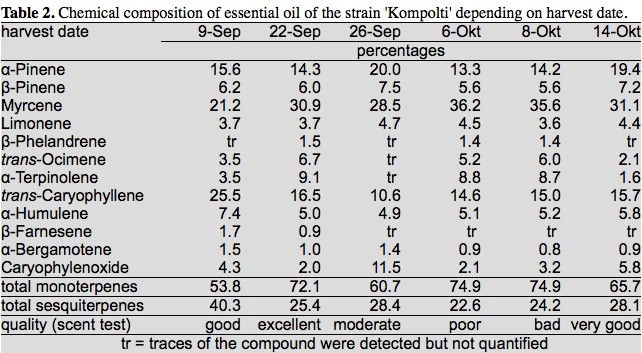 In order to characterize cannabinoids production researchers have studied 157 cannabis plants grown at common conditions. Although THC and CBD are produced in greater quantities, in some plants THCV could exceed the production of THC. THC and THCV are primary responsible for cannabis and hashish euphoric effect.

Extracts of Cannabis Indica (“Indian hemp”) were commonly used in Western medicine, while European hemp generally was considered as unsuitable for medical use. High levels of THCV were observed in cannabis strains from southern Africa, India, Nepal and eastern Asia.

Hemp seeds oil contains polyunsaturated fatty acids, among which are several essential fatty acids such as linoleic and alpha-linolenic acid. According to reports hemp seeds oil reduces the risk of cardiovascular diseases, cancer and age-related macular degeneration due to its fatty acids and tocopherol (vitamin E) composition.

One of the aims of this research was to determine the effect of cannabis growth stage on fatty acids production. The authors observed that the amount of palmitic acid, oleic acid and linoleic acid decreases with increasing growth stage. Alpha-linolenic acid was the most produced fatty acid during all stages and ranged between 48-54% of total fatty acids content. Myristic, palmitoleic, stearic, vaccenic and stearidonic acids were produced in small amounts and was not affected by the growth stage. The unidentified fatty acids increased during mid vegetative to the shooting stage and then decreased. [4]

2. A CHEMOTAXONOMIC ANALYSIS OF CANNABINOID VARIATION IN CANNABIS (CANNABACEAE)