Day 29 for the Amethyst – things are picking up steam. I transplanted one yesterday and am still deciding if I can keep the other one. Now that the bigger one is in a bigger pot the little girl really gets no light so I’ll see how things pan out.
This is the one that got transplanted she now stand 13 inches tall and is pushing out those side branches like crazy compared to last week

Here is the smaller one in a .75 gallon pot that is just being left alone for now waiting to decide if she’s getting enough light or taking light from the other Amethyst  same age as the first one and 10 1/2 inches tall

Day 38 for the Amethysts!
Tall one (white pheno) is doing good I just realized I made a rookie mistake and mixed the super soil at half dose

hopefully she doesn’t mind but I see a bit of calmag defficiency I dosed her with molasses today but I’m going to get some calmg ordered for her. Stupid mistake right there! 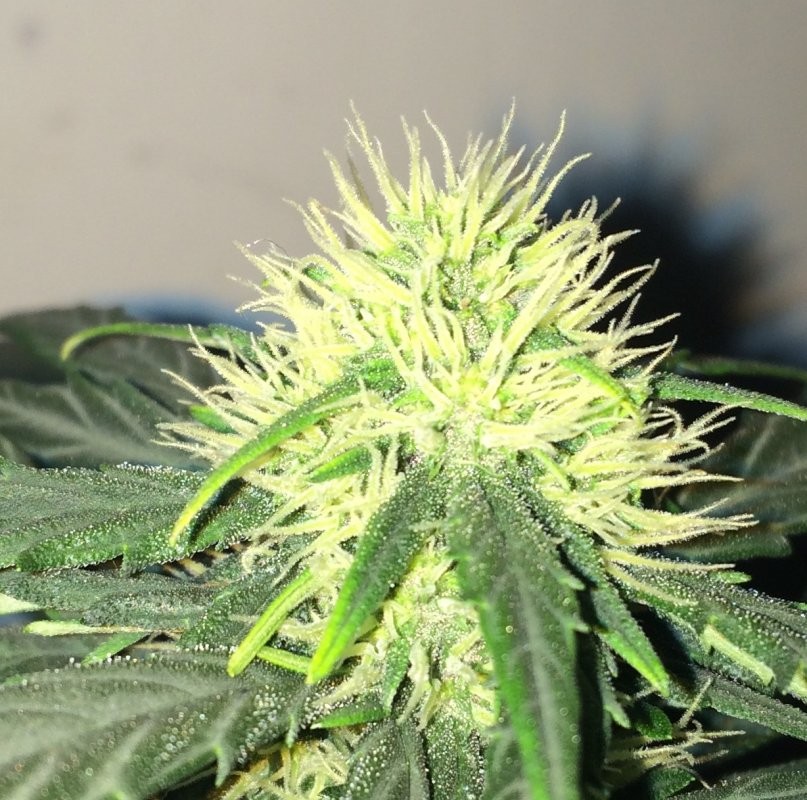 Who knew a Amethyst could be purple

All of the calyxs are a slight purple and
I’m sure we will see it develop darker and more noticeable as she fattens up but for now I think you can still notice it. 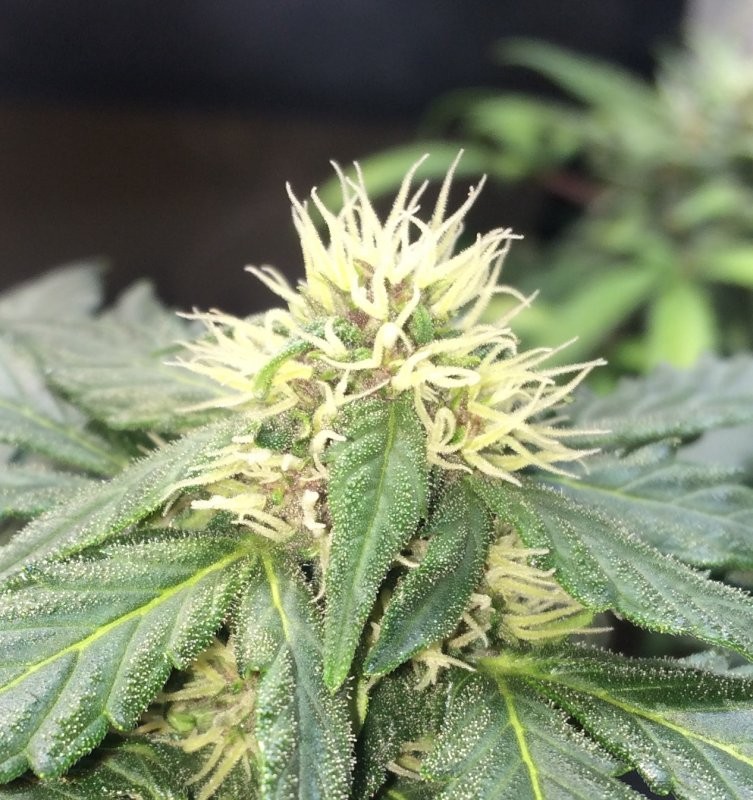 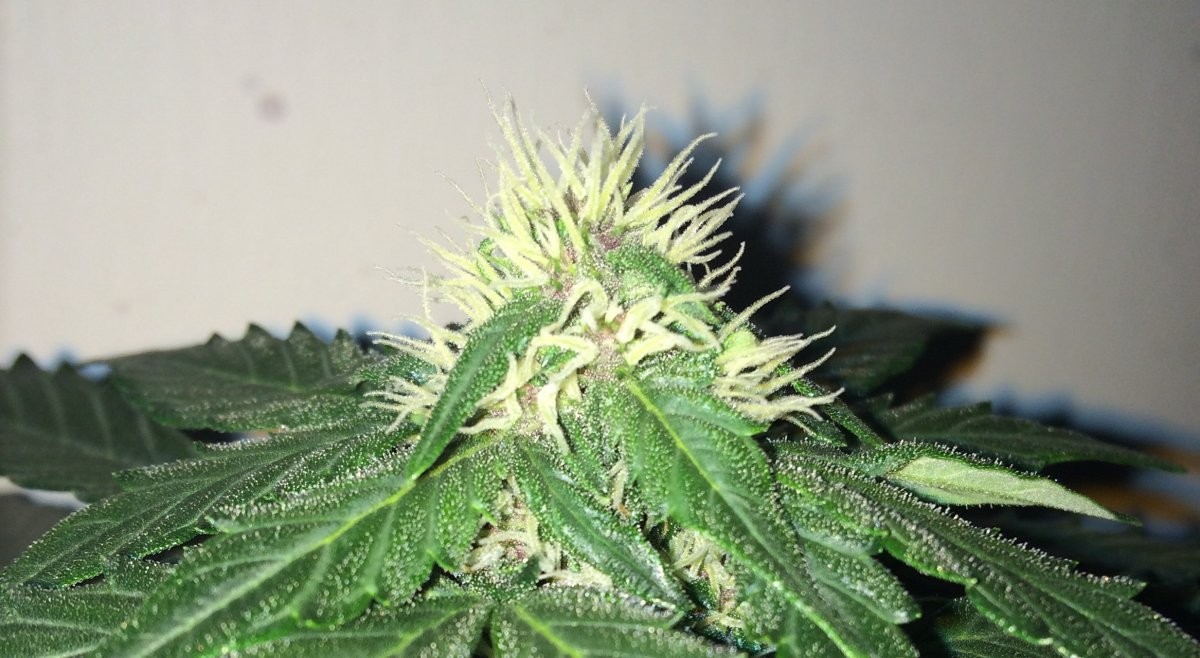 Day 45 for the Amethyst’s a bit of deficiency on the Purple Pheno but she is getting neglected. It’s hard to tell in the pictures but she is purple. She just has so many white hairs it flushes it out in pictures. She’s around 12 inches tall 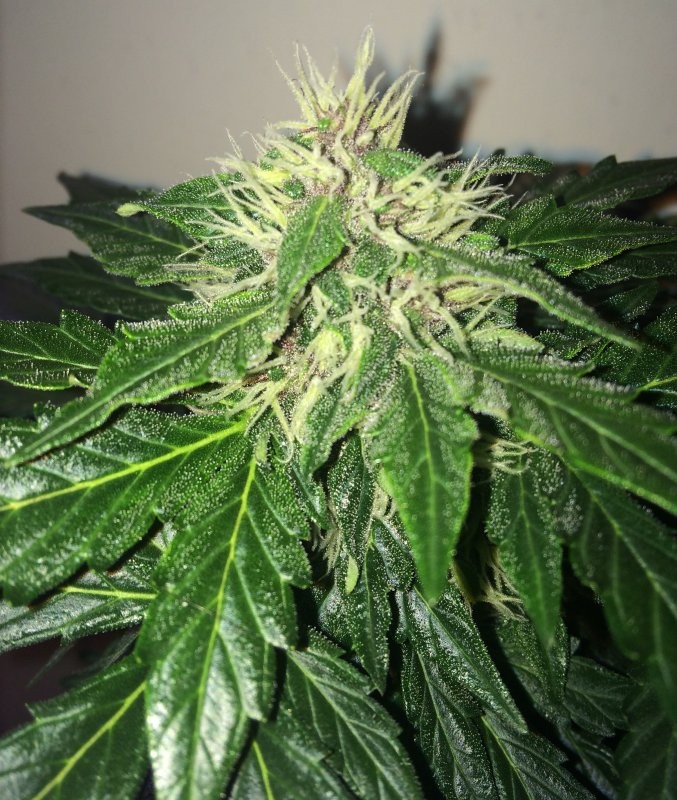 White Pheno AKA Big Girl also had a messed up leaf which I’m pretty sure is calmag but she was put in half strength soil by accident! Now sitting around 15 inches for her

The White Pheno is putting most of her energy into the min cola the side branches aren’t really fattening up any but she’s doing good for he most part. 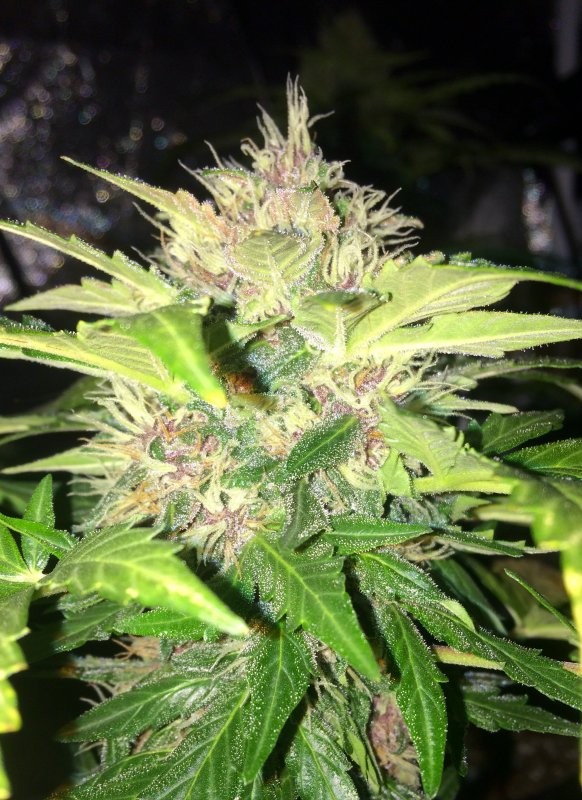 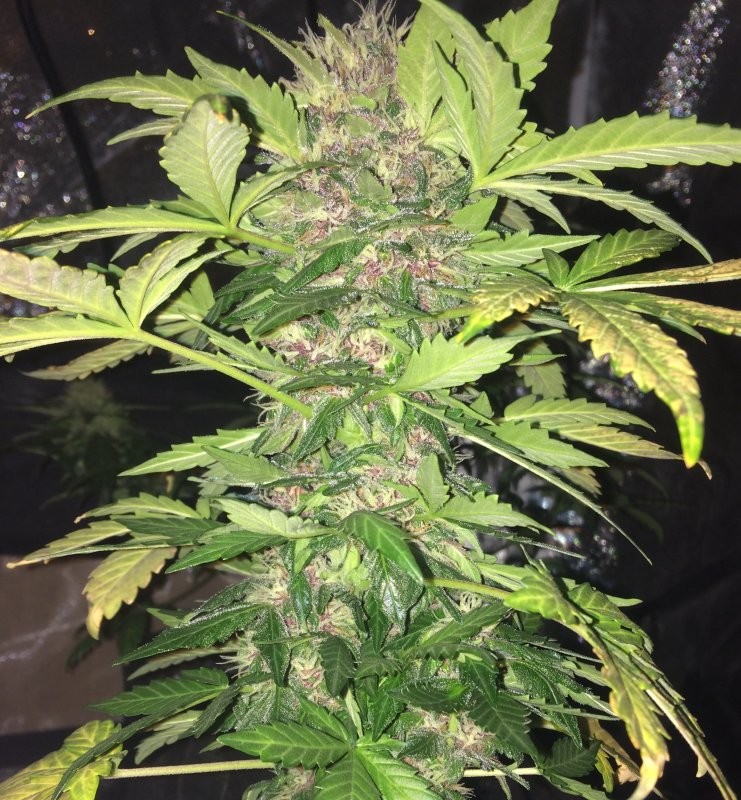 Then the purple Amethyst is just one huge donkey dick cola! I’m sure she would have branched more in a bigger pot and if given more space but I really like how she’s just one huge cola! Also she’s only in a .75 gallon pot but is going good .Seems like she’s a quicker finisher than the White pheno. She’s just maturing at this point haven’t noticed any real bud swelling lately she might be about done idk yet 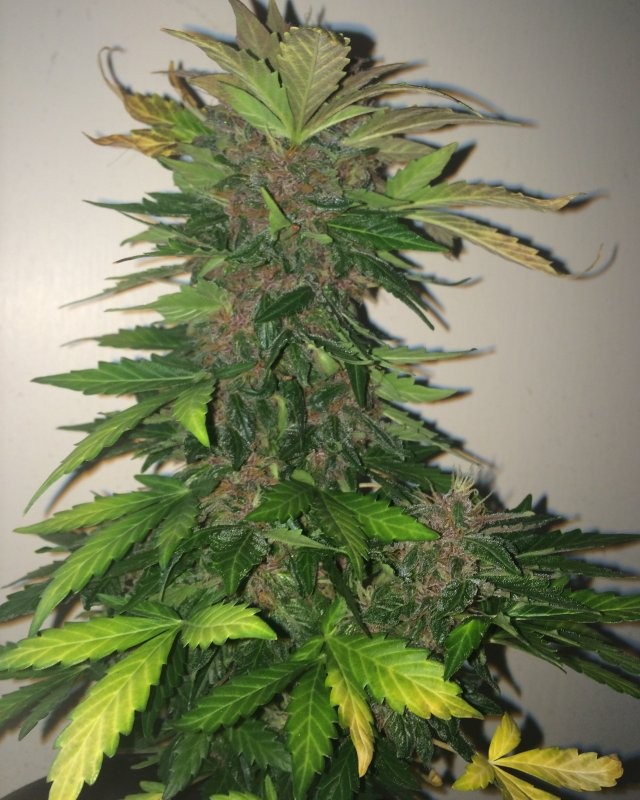 White Pheno just maturing and swelling. She also is starting to show little bits of purple in her calyxs not as much as the smaller Amethyst  but it might get deeper purple later on in bloom

Purple Amethyst these pictures don’t do her justice. On my phone they are spectacular but when I upload them they no longer look the same. Her buds are like artwork with the sparkling trichome coverage over every area that you can see as well in these photos. She smells Musky and Skunky but also very sweet/berry/candy undertones in there she will probably get the chop on friday! She is almost pure cloudy with just specks of amber but thats exactly how I like them!

White Pheno has some purpling as well very slight but its there she still has a couple of weeks left in her. She does have alot of ambering on the top buds that i didnt take pictures of but she still has all white pistils thats weird huh?!

Purple Pheno got chopped on day 66 and white pheno was day 71.

Although the White pheno smelled like musk on the plant while I was chopping I got a berrylike cheese smell from her it’ll be fun to see how she smells as she dries and cures.
The main cola was super fat. It’s bigger than my forearm in length and width.
And it turns out that she is also purple just a lighter shade so I couldn’t tell as much as the other Amethyst

Purple pheno smells like musk and candy.
While I was chopping I got a strong sage odor with some sour to it though. I did find one stray seed so somehow she got hit with a spec of pollen. They are super dense some of it I couldnt even trim the leaves like I usually do because I couldn’t get inside the bud its like a rock
Can’t wait to get her dried up and cured!